What is Syn Coll, a tripeptide help reduce signs of ageing?

What is Syn Coll, a tripeptide help reduce signs of ageing?

Youth is ephemeral but the feeling stays with people forever. Why people love their youth so much is attributable to the perks that come with it. Such perks make people love their lives and the craze to stay young thereby arises strongly within. Being always in a youthful state is difficult to achieve as with age, our energy level and vigour to live and work tirelessly decrease massively. But then people often feel if they could even preserve the outward beauty, it would be enough. Since the time people have begun collectively believing this phenomenon, half of the world is secretly trying out different anti-ageing treatment formulas tirelessly. Until a telomere time bomb works completely to reverse ageing entirely, we must find solace in maintaining an outward youthful experience every day.

Another promising molecule, a tripeptide called Syn coll has already received a patent.

A synthetic palmitoyl tripeptide-5, Syn coll works by boosting collagen production and on the other hand, prohibits its degradation thus elongating the lifetime of a collagen molecule. Syn coll received a better response when it was tested in vivo (occurring in a living being) compared to various other products and when it was determined that Syn coll can be mass-produced cost-effectively.

What is a tripeptide structure? 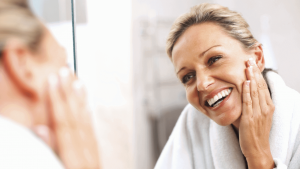 If you may wonder what a tripeptide is?

It is a triple amino-acid combination within a single molecule. Each of these amino acids is engaged in reducing the seven signs of ageing that appear visibly on human skin.

What can the tripeptide Syn Coll work for?

What not can it work for? It reduces the seven signs of ageing, and all you have to do is, diligently apply it daily.

1. It can help reduce wrinkles in ageing skin,

3. It can smoothen and energize our skin and

6. It works towards adding improved elasticity to the outer skin layer.

7. They can improve the overall skin texture commendably.

The next most anticipated question that will need answering is knowing its mode of action accurately.

A complicated mechanism works together to make Syn coll one of the best products to improve our skin appearance without having to face a lot of its side effects.

Syn Coll is known to have a dual effect on our skin.

Thus, until scientists find a better cure for old age, we can merely be, contend with the outward appearance change and what is better than a simple molecule. We often like everything around us to be hassle-free yet effective, and Syn Coll is exactly promising it.